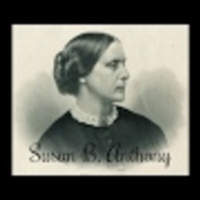 Susan B. Anthony, to a convention of the Bricklayers’ and Masons’ International Union, held in Rochester, NY, on January 13, 1900

"Help women to become enfranchised. Do this that we may be able to join with you to bring about the good that we all desire. Think of the waste of Elizabeth Cady Stanton’s life—she is in her eighty-fifth year now, and all of her working days have been spent in begging for the tools to work with! Think of what she might have done for the world if she had had these at the beginning! And I make bold to say that I myself could have done more if I had had the tools—the ballot and the opportunities that the ballot gives—put into my hands at first instead of having had to spend fifty years in pleading for them. Your own interest demands that you should seek to make women your political equals, for then, instead of their being, as now, a dead weight to drag down all workingmen, a stumbling block in their path, a hindrance to their efforts to secure better wages and more favorable legislation, the workingwomen would be an added strength, politically, industrially, morally.
Women should vote for the sake of the home. By working to give your wives and daughters the ballot you would be working to double the representation of the home in government; for the lowest men—the men who make up the slum vote, the floating vote, the vote that can be bought by anyone for any measure—these men seldom have homes and women in them whose votes could be added to theirs. It is the honest, hardworking men, with homes and families, those who have done most to build up this country and who are the bone and sinew sustaining it today, who have most to gain from women’s getting the ballot. But the best argument of all is justice—the sister should have the same rights as her brother, the wife as her husband, the mother as her son…
I appeal to you as men, I appeal to you as brothers, I appeal to you as voters of this republic, clothed with the regal power of the ballot, I appeal to you as sovereigns! We want the same political rights that you have, the same weapons that you have; and we will stand by our fellow women and fellow men as loyally as you now stand by each other."