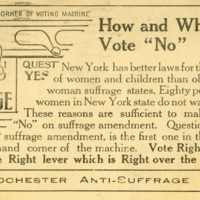 How and Why to Vote "No" postcard 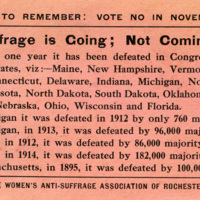 Vote No In November postcard 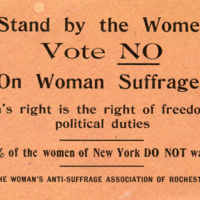 Vote NO on Woman Suffrage! postcard 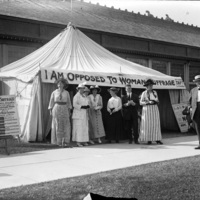 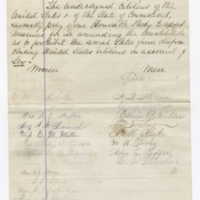 Woman suffrage petition to the U.S. Senate and House of Representatives assembled 1876-1878.

With the state set to hold a convention to review and revise its constitution in 1894, New York State Woman Suffrage Association President Jean Brooks Greenleaf decided that the demand for the vote would be more powerful if it came from women all across the state, rather than from the movement’s leaders alone. Toward that end, clubwomen worked in each of the state's Senatorial Districtst to collect thousands of signatures on pro-suffrage petitions, gather information on the tax burden bourne by women, and select representatives to speak to the convention. Despite these efforts, woman suffrage was defeated 97 to 58.

"The old way has been to lobby. We thought we would try a different one. Of course we expect to meet the members of the Convention, but we do not want to do (what has always seemed to me, the undignified thing) the button holing [etc.], that it has been charged has been done in the past.”  -Jean Brooks Greenleaf to Ella Hawley Crossett, May 13, 1894

Suffragists had faced opposition since 1848, but the anti-suffrage movement didn’t begin to formally organize until the 1890s. The New York State Association Opposed to Woman Suffrage was founded in 1897 and its members contributed to the establishment of a similarly named national organization in 1911. Rochester women formed a local anti-suffrage club, as well.

Rochester’s anti-suffragists tended to be women who were comfortably ensconced in the upper class. Many were active in charitable organizations, such as the Female Charitable Society, and sought to improve conditions for women and families through acts of social good, not politics. A 1915 anti-suffrage petition included the names of some of the most prominent women in the Rochester community: Mrs. Edward Bausch, Mrs. Carl F. Lomb, Mrs. James Cunningham, and Mrs. Rush Rhees, among others.

Women who opposed suffrage did not do so irrationally. They made well-reasoned arguments for their positions. Most believed in the idea that men and women operated in separate spheres—women in the domestic space of the home, men in the public realm of business and politics—and that each sex exercised influence within its designated sphere. Such women fought against suffrage because they feared that they would actually lose power if they no longer had a role distinct from men’s.